Some good news then.

Those under dash components are rubbish. The rust on mine provides supports for the vinyl only

In between heavy winds, snow, and torrential rain, I still managed to fit the work tent with some work lighting. 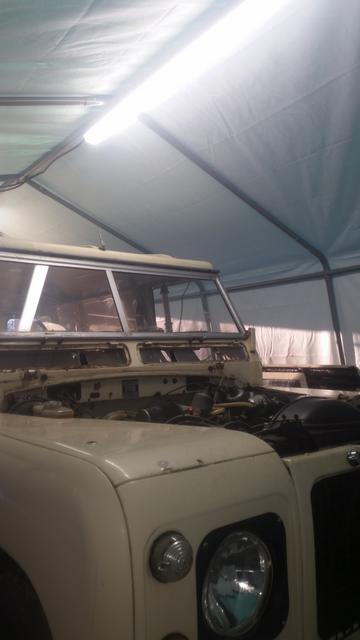 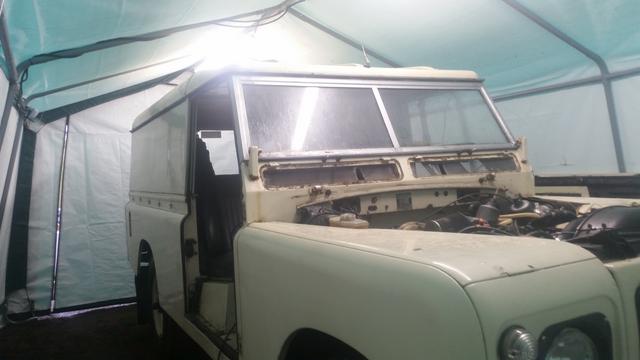 Nice to be able to see what I'm doing.

Pushed on and removed the windscreen 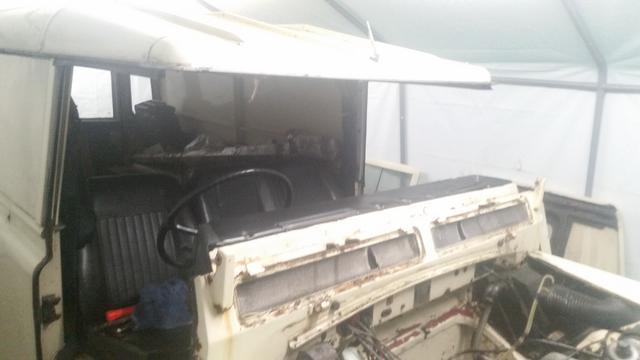 and started dismantling the dash 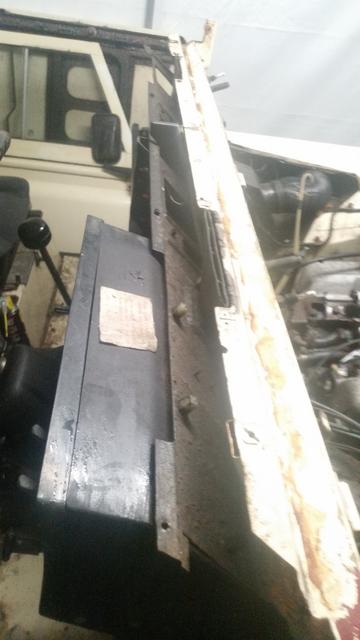 More good news as there was no rot on top of bulkhead under the screen. The brown stuff in the photo is old glue residue that had been used to stick the rubber seals in place. Also, there is red paint showing through were the bulkhead had been sprayed over without proper prep and priming. 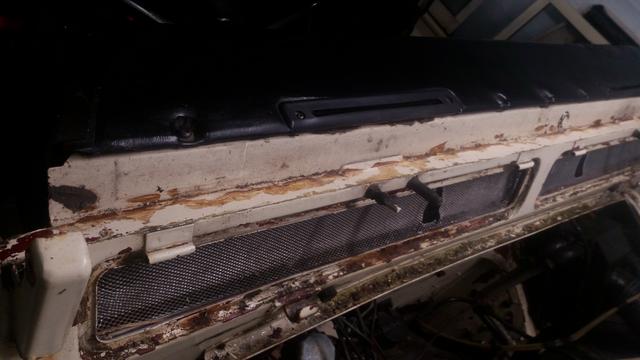 Had to knock it on the head for today as my feet are freezing! Pretty happy so far as apart from the welding to the footwells and a bit on the top LH corner of the bulkhead, it's rock solid, so mainly cosmetic. Obviously there's loads to do yet and the mechanicals are less likely to be so straight forward, but encouraging so far.

BTW, does anyone recognise if this bulkhead looks like a Stage 1 version or a 110 or something?
Cliff

Looks like a standard Stage 1 bulkhead to me. Anything making you think it isn't? (you can always google images of 110 bulkheads - images of Stage 1s' slightly harder to find)
2 1981 Stage One 109 V8 SWs

No, I was happy enough it looked right. It was just the fact that it had been replaced in the late 90's made me wonder. Also the parts manual shows the 2 short gutters rather than the large 1 piece gutter; which is confusing. Anyway, it's pretty irrelevant really.
Cliff

Both mine have one large one-piece gutter like yours (as did my 2.25) so I don't know where the illustration in the parts book comes from. So does the 110, but the later bulkhead's gutter appears to extend further at the ends if this pic is anything to go by:

Managed a few hours today so cracked on and removed the dash assembly. 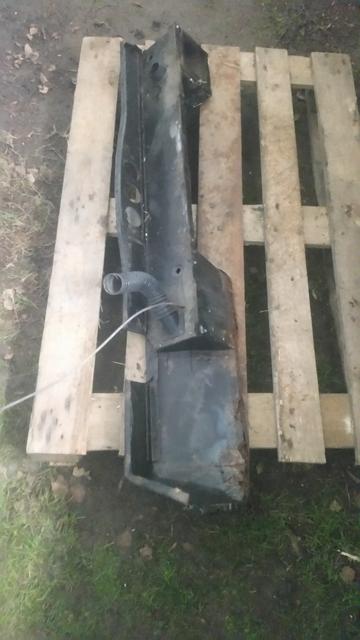 The heater duct/lower crash pad was in the same state RH end as was the washer pump cover. 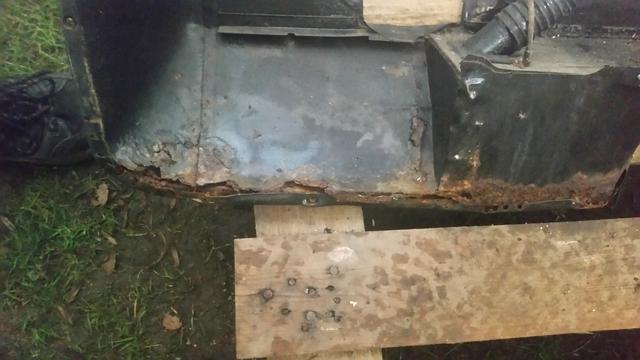 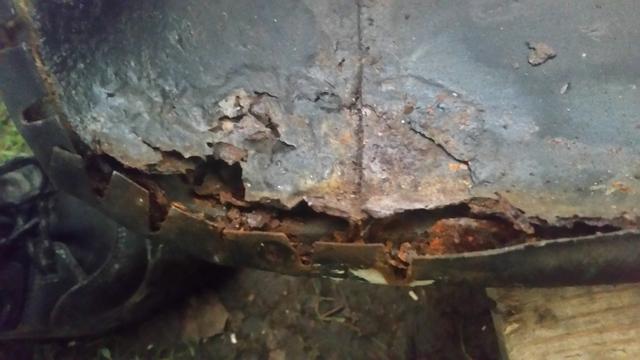 Not sure I'm going through finding a replacement anytime soon; I'll probably have to try and fabricate my own.


The front plate crash pad was only slighty corroded. 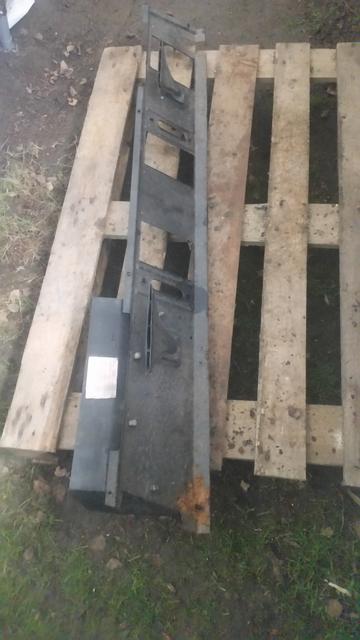 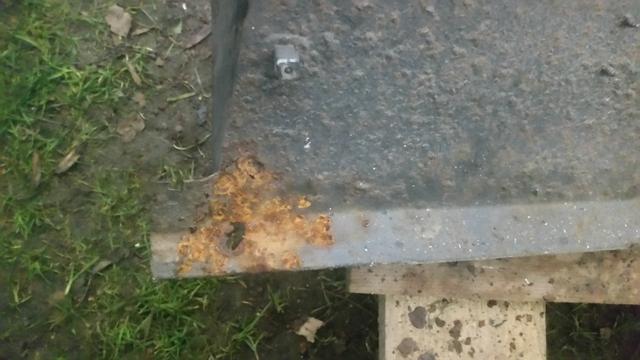 So, progress slow but steady. 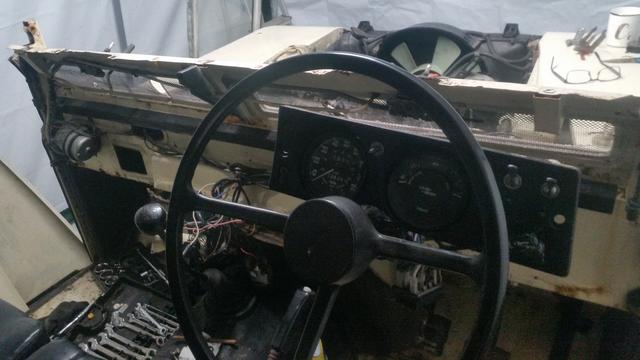 Interesting find was the original key no. label still attched to the instrument cover 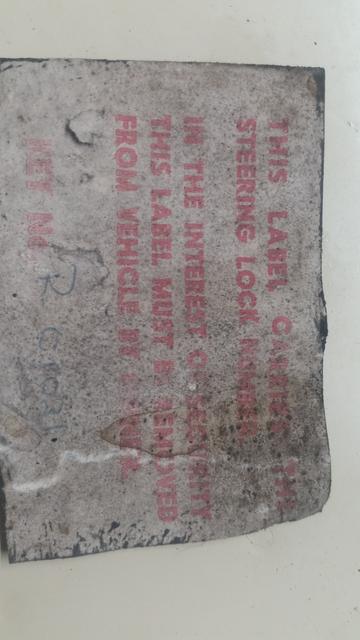 BTW, I now realise that the 2 short gutter bulkhead is the pre 1974 S3 version.
Cliff

Yeah, the lower dash is a pain. Fibreglass version might be the go.

Good to know about the firewall, and that it fits.
Alan

Started the week by spending the day repairing a failed SLS RHS on my Discovery 2, but did have a quick 1/2 hour spare, so took the roof off the 109. 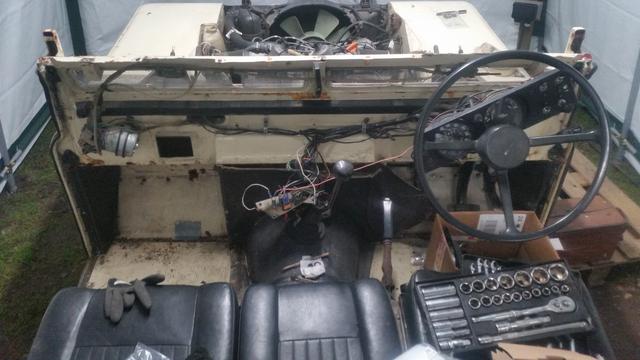 Got stuck in again today. It's slow progress getting the corroded nuts and bolts undone, and not having worked on one before, working out what needs to be undone and taken off takes time too, but it's moving on. Got the front RH wing... 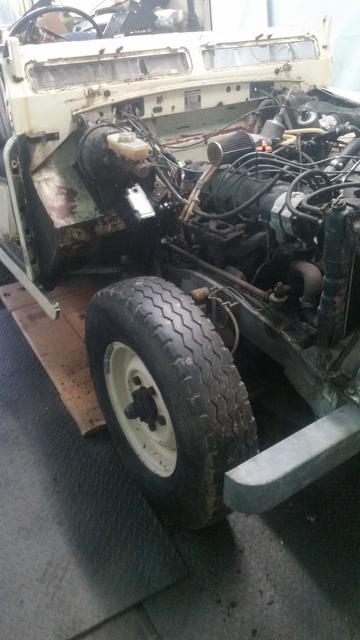 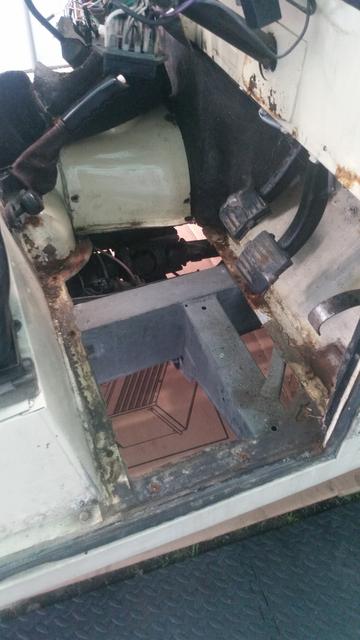 It does seem I've been quite lucky in that the rot is not too bad; pretty much just the footwell this side. 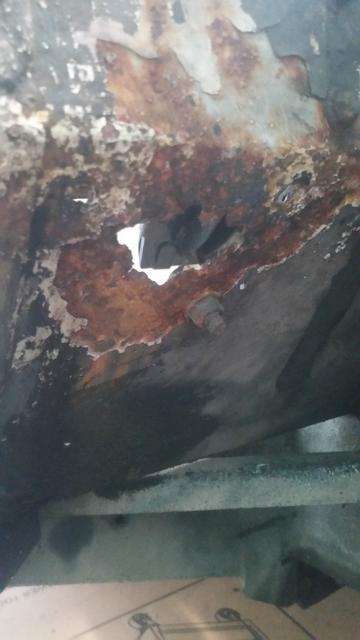 The repair done by PO for MOT is rubbish though... 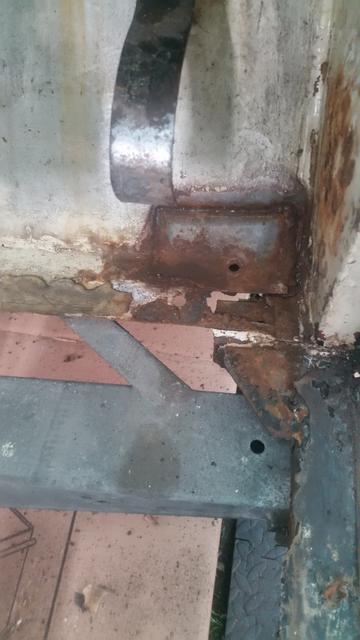 Welded in a patch but didn't do anything to protect it from further corrosion, also patched on top of rusty steel. 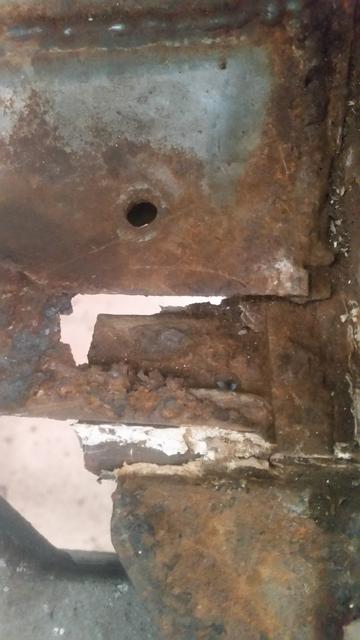 Seems absolutely pointless to not do the job properly. All it needed was a bit of a wire brushing and some rust stabilising paint and it would have lasted years. As it is, it's been about 3.5 years and needs to be done again.
Cliff

Got the LH wing off today. Slow but steady progress. Shouldn't be too long before I can get the bulkhead out and start repairs. 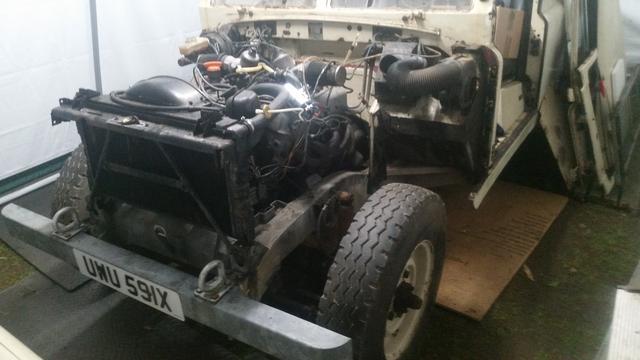 Top of footwell by heater box 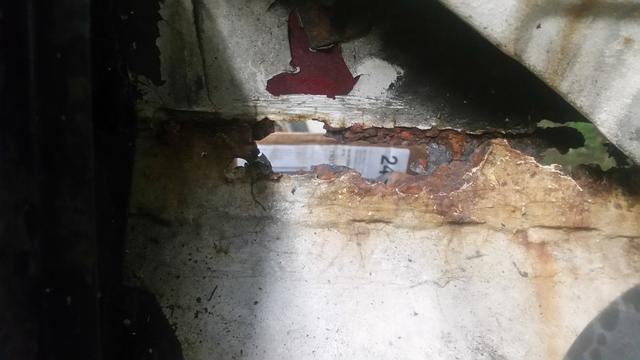 Bit more where it's bolted to support 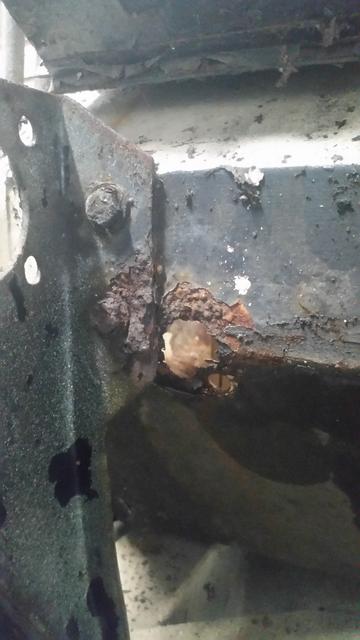 And a hole in bottom of the pillar. 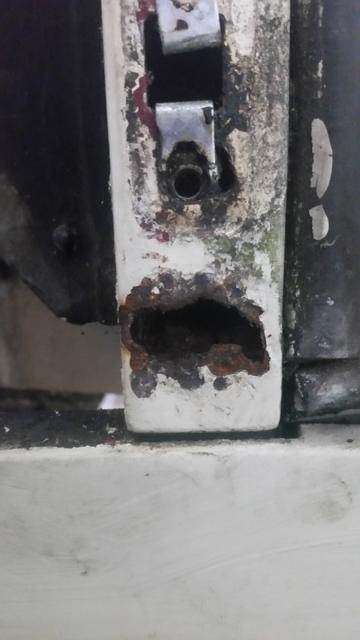 So, probably will replace both wells complete rather than mess about patching, a section of pillar (although that looks patchable its so small). I'll replace both the mounting feet too. Strip the whole thing back to bare metal and see if I can get it galvanised.

I'm more concerned about the state of the front axle. The swivel mounts look pretty crusty. It'll be coming off in due course and getting blasted.
Cliff

Making great progress. It is probably better to do as you suggest.

Shot blast or acid bath, or something else for stripping?
Alan

I've been slowly inching forward getting the old girl apart. All was going relatively well considering its age and how long some of the nuts and bolts have been married together. Then I came to remove the steering wheel, and it would not budge. Tried everything in the pull it, hammer it, heat it, curse it, tool box but nothing worked. After trying advice given on standing grasping it and yanking at it and giving it the shock treatment with a blow to the flushed off locknut and still no joy, I decided to try a bearing puller.
There's a special tool for removing the range rover classic steering wheel that looks like a bearing puller with a plate to go under the wheel boss to pull against. So, I made a plate out of a piece of 6mm steel... 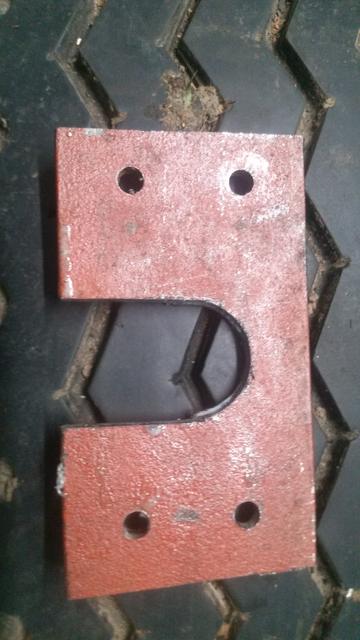 Put it in position...

...and put a bearing puller on it. 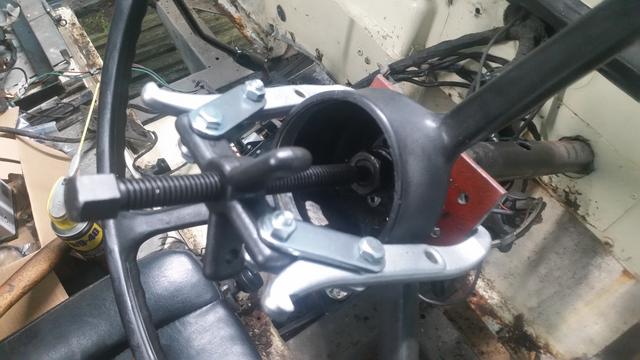 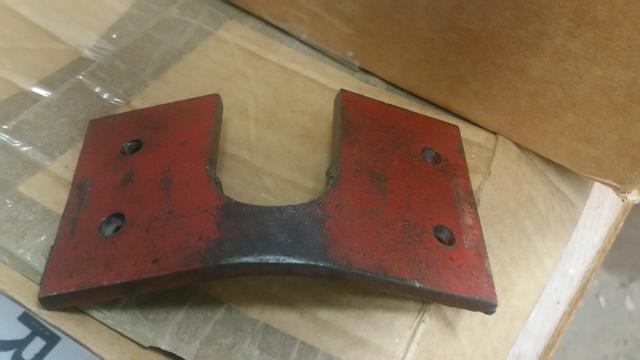 ...one very bent plate and a steering wheel stuck solid that refuses to budge.

So, what on earth is the solution? Should I strip the steering box and remove the column from that end instead. It needs to come out as I'm getting the bulkhead out of the vehicle.
Cliff

Slacken the nut, grab the wheel at diametric opposites and pull one side then the other (rocking). Four good jerks should be enough. No nut and you may wear the wheel.
Top

I concur with Map. Squirt it will some penetrating oil too while rocking.
Alan