Well, I'm itching to get going and start the restoration of my 1981 stage 1. I'm going to have to work on it outside as I don't have a nice big dry garage. I was thinking about buying a tent garage to keep the rain off. Anyway, The obvious major job I have to do is to get the bulkhead out and repair it, new footwells and some patching is required; maybe more once I'm able to see the full extent. So my question is, where should I start? I'm thinking wings off, doors off, and I guess move the roof back off the screen frame. Being as this is my first series landy, any tips and advice on how to best remove the wings would be most welcome. I'm in danger of procrastinating if I don't get a positive start as right now, it seems like a really daunting undertaking.

As with any such work, perform a proper assessment first. Not pull it apart then look. Possibly pressure clean first and assess all body and mechanicals. Get it running and test drive if need be.

There isn't much on a Land-Rover that is hidden or remains hidden after a decent steam/pressure clean.

You're in England so most things are available as exchange or the option of having yours repaired. Such as bulkheads which can also be galvanised. In and out done.

Wings come away as a sub assembly left and right. You can get away with the roof untouched. The unbolted windscreen frame will dislodge when you kick the panel out from under it.
Top

Thanks for that. I have of course crawled all over the vehicle, driven it, and identified the obvious problems. Like most vehicles in England, corrosion is the big problem. My stage 1 was already rebuilt on a galvanised chassis and had a replacement bulkhead (shame that wasn't galvanised too) and an RPi rebuilt 3.5 V8. The chassis is lovely and clean and solid and the V8 runs smooth and sweet, bodywork-wise it is the holes in the bulkhead and rusty doors that need sorting. Also the cross supports under the rear tub floor look like they need replacing.
A new fuel tank has already been fitted and I've had to replace a failed fuel pump, but that's all I've done so far. It is going to need the brakes sorted all round, fluids replaced, and a bit of rewiring. There is also a bit of oil underneath, so need to work out where that's coming from and attend to it.
I think I can get it roadworthy and through an UK MOT, but I do want to do as full a restoration job on this as I can. I guess I'd just best get the washer out and give it a blast over and then pull it apart! Lol
Cliff

Gave the vehicle a good power wash down. Bodywork is pretty sound, chassis is excellent, the bulkhead corrosion seems to be limited to two holes through the footwells; one small one to the right of the throttle pedal, and a second larger one beside the heater box. I'll need to get the dash, doors, and wings off to see if the pillars are in need of repair. The engine bay and the engine are free of oil with a bit of surface corrosion here and there.
There is oil on the transmission brake drum and it is not braking, so need to sort that. Also, when I went to drive it up onto my ramps, it didn't want to go in gear - it was fine last time I moved it a few weeks ago - so I have to work out why that has become a problem. Will be investigating tomorrow weather permitting. I wonder if the oil is in fact the clutch fluid?
My plan is to sort the brake (oil leak/clutch) and then get that bulkhead out. I want to get it blasted, repaired and galvanised. Beyond that, hopefully it will be possible to carry on a rolling restoration rather than just ripping it apart and rebuilding it over the next couple of years!
I should have started this post as a new vehicle restoration thread, so will probably start one with a bit of cut and paste.

Brake fluid leak would be at the other end of the box.

Vent is probably blocked the the drum end preventing oil from leaking outside the drum/onto the backplate.
Top

This is my 'before' shot. 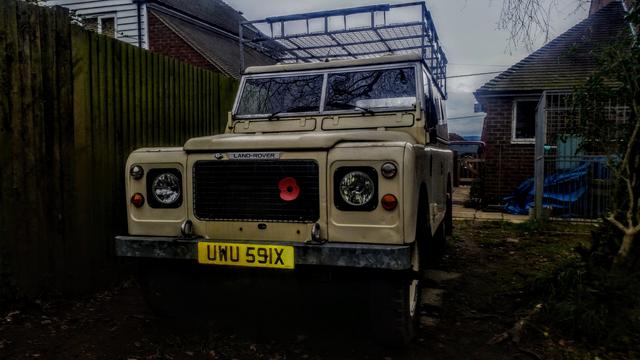 Photo's a bit dark, but sky was too bright.
Cliff

Well, slow progress getting prepared to work on the vehicle. However, I did manage to move it. Strange why I had trouble getting into gear before as now had no trouble at all. Confused. Anyway, repositioned and took delivery of a 12x20 garage tent so will soon be undercover. The transmission brake looks like the handbrake lever linkage so will be dealing with that.

I'm really looking forward to getting her sorted and back on the road. I don't know the vehicle's history, but it was rebuilt in the 90's as the engine in now is an RPI rebuilt 3.5 ltr Pulsair (11D) as fitted to the Range Rover Classic. RPI confirmed they rebuilt this in 1996 as 3.5 ltr with standard cam. The pulsair system was removed so none of that nonesense to deal with. It sounds nice and smooth when running so I don't think it did many miles after the rebuild (there's only 12450 on the clock?). It needs tuning though. It's been many many years since I drove a vehicle with a manual choke. I'm not used to starting up a cold engine and waiting for it to warm up and idle without the choke. I think I was being impatient as it kept dying as soon as I tried to rev it or drive it. Seemed ok after leaving it running a while. I'm assuming I need to tune the twin SU carbs. I might go for a Webber 500 carb upgrade if I can find the money. The other main issue is the gearbox. I'm not sure if I have a problem or not until I can actually drive it. All I can hear now is a clutch release bearing/spigot bush noise, so I'm hoping the PO had just panicked unnecessarily about the gearbox. Anyway, I have the the spare LT95 that came with the vehicle. This has an overdrive already fitted and I believe, the higher ratio gearing. I'll have to have the box inspected by somebody more expert than me lol.
Cliff

If you are considering leaving the standard factory carb set up I offer up the Holley Sniper throttle body fuel injection kit for consideration.

No, it is not cheap. But it appears very simple to install and is a very tidy package. I have seen this installed on a friends Rover 3.9 V8 buggy build and it runs very well. It is probably as close to install-and-forget / maintenance-free as you can get for a Rover.

Took delivery of garage tent, so managed to put it up and get the vehicle under cover. I got the 20x12 foot garage so should be ample space to work. It's freezing here at the moment so not sure how much spannering I'll be doing, but hopefully can make a start now I have shelter. 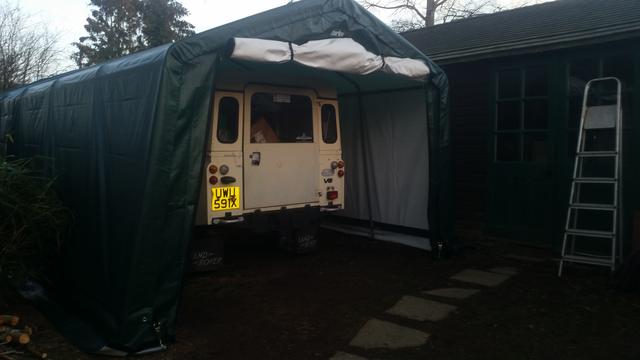 I guess I need to sort out some lighting too 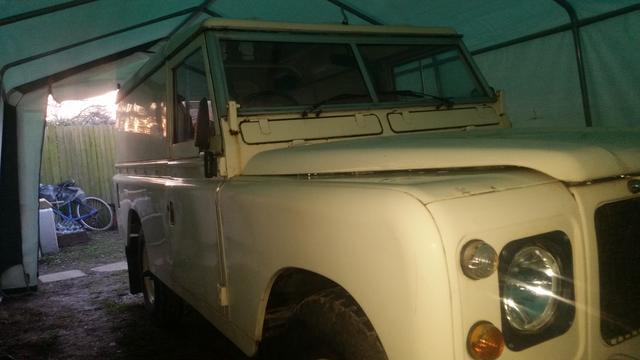 Changing from SU to Weber will not improve performance and economy. It will be a waste of time and money. Better you have it professionally tuned if you are not able to do it yourself. Once tuned, they will not need attention for years.

Most of the issues you describe seem pretty minor. The LT95 is a noisy beast at the best of times and mine has been noisy out of gear since I've had it (15 years). I've done over 180000km in that time and the vehicle is over 300000km now.
Alan

Seems to be a variety of opinion on the merits or not of changing carbs. I guess that the main attraction of the 4 barrel Edelbrock is only having one carb to worry about and none of the balancing palaver. Also, reliability of the carburation through newer, more up-to-date kit.
Anyway, long way off. I will adjust the SU's before making any rash changes.
Cliff

It is true that there are opinions, but my approach is to question three/four things in order of importance:
1. Will it improve performance (increase power and output).
2. Will it improve fuel consumption (obviously a balancing act with 1 above).
3. Are new instruments a significant improvement on existing units (reduced maintenance, plus 1and 2 above).
4. Are parts and knowledge readily available for existing instruments.

I changed from Stromberg to SU because I changed from 3.5 to 3.9 for 1 and 3. They use more fuel than the Strombergs did but they have no rubber diaphragm that I got sick of replacing regularly due to bio-gas.
Alan

The LT95 is a noisy beast at the best of times and mine has been noisy out of gear since I've had it (15 years).

I have SUs in one, the original Strombergs in the other (rebuilt 5 years ago) - perfectly happy with both - I don't find the SUs use more fuel - maybe yours do, Alan, because you changed to a bigger engine?
2 1981 Stage One 109 V8 SWs

Yeah, that was my conclusion

Took the first step and started the strip down. I want to remove and sort out the bulkhead first, so LH door off, then the vents. Not a great deal done yet but it's a start.
I've ordered some lighting for the workspace as it's a bit dim in there at the moment. 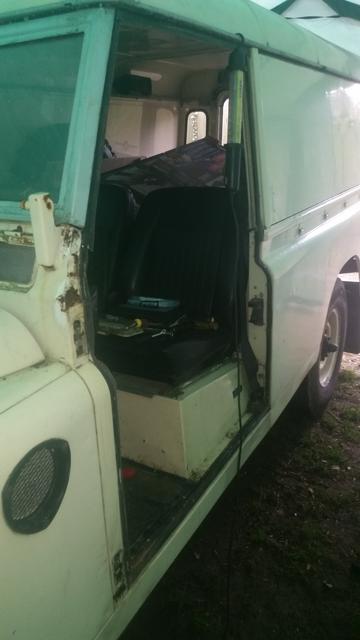 The rot at the top corners is typical but should be easy enough to repair. 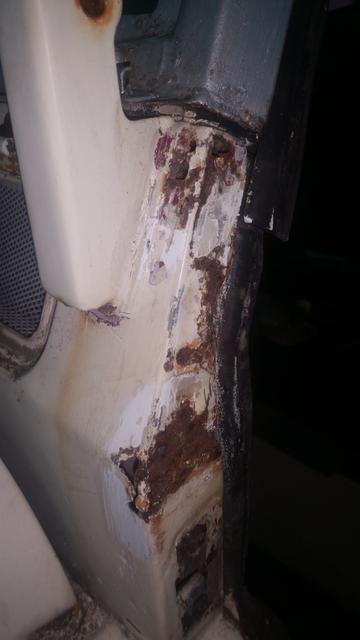 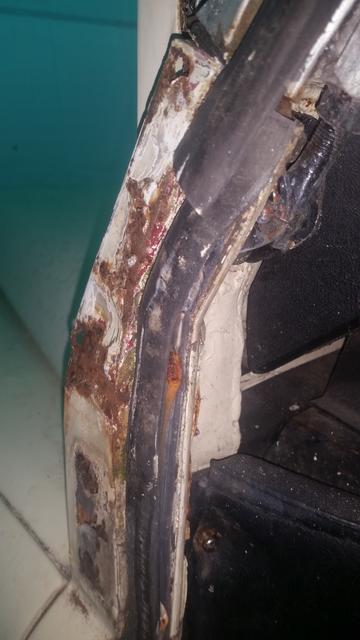 There's also work to do at the base of the pillar 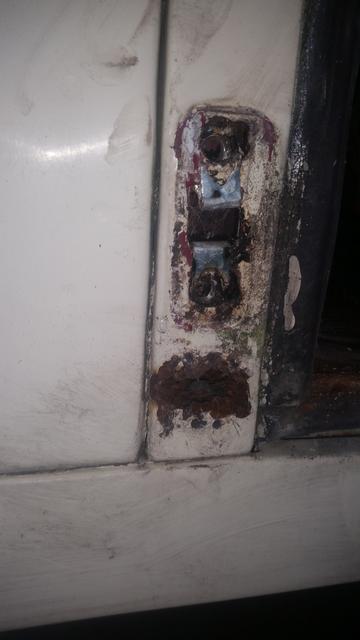 There are two areas of the LH footwell that have gone through. I'll either patch or replace the footwells completely.

Small hole to air your feet 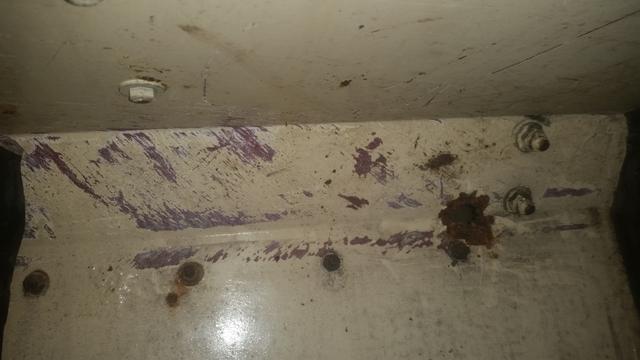 The worst of the rot is at the top at the seam (like they all suffer). I'll remove the dash corner cover and have a closer look inside. 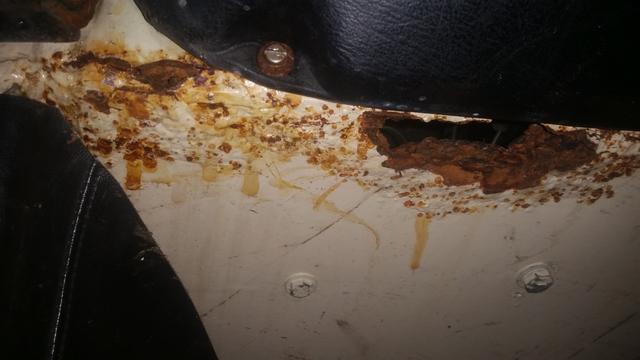 Hmmm, not much more to see 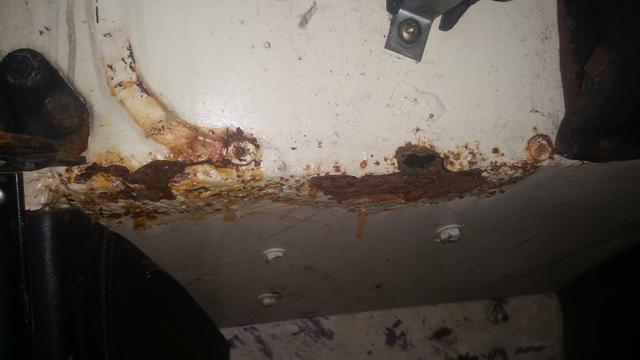 The cover is a bit of a mess though, I'll be needing/making a new one of them. 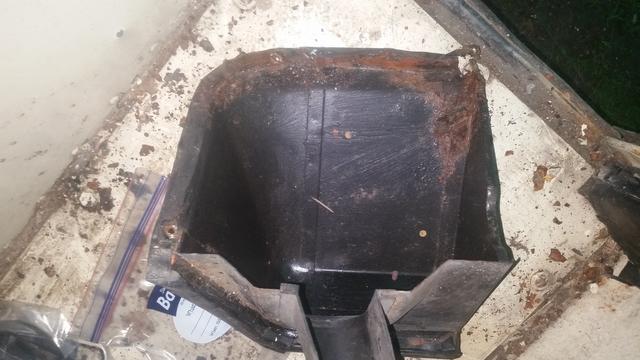 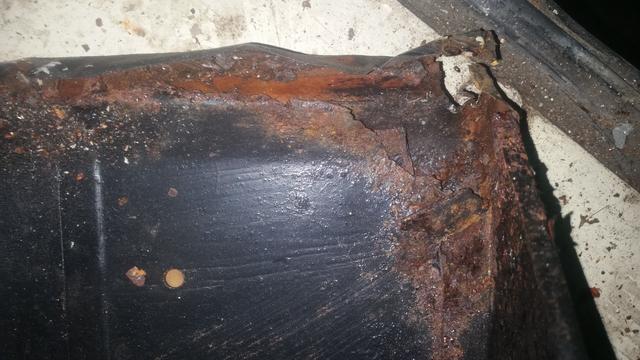 Fortunately, there is no rot around the vents. For some reason, I thought there was going to be work to do on these as some rust flakes came off when I first inspected the vehicle; not the vents though apparantly. A bit puzzled but actually relieved. 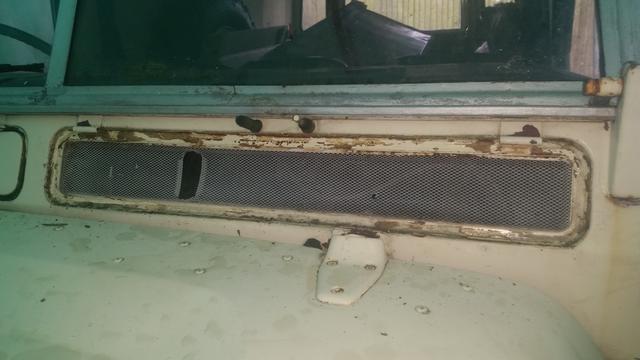 So carried on in the fading light and took the other vent and bonnet off, but that's it for now. 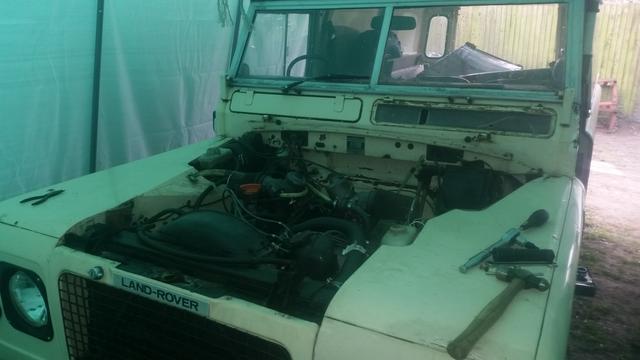 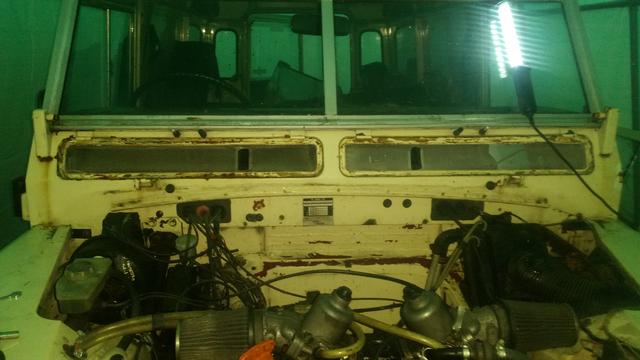 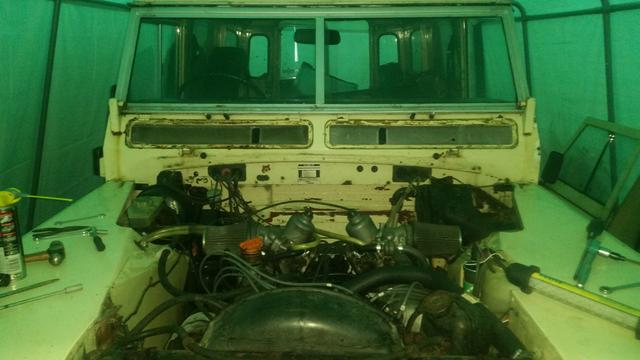 It is obvious that she had a replacement bulkhead when the chassis was replaced; It's a different colour under the now flaking paint (poor paint job). Shame it wasn't a galvanised one like the chassis, would have saved me a lot of work. However, it does look like the rot has not gotten too bad yet, so fingers crossed, I should be able to repair it relatively easily.
Cliff